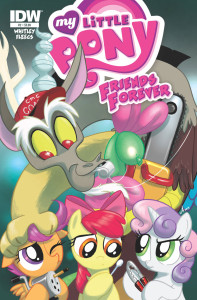 With “Friends Forever” the comic franchise My Little Pony got a second ongoing series right next to “Friendship Is Magic”. And while My Little Pony: Friends Forever #1 was a rather disappointing start (the story was uninspired and the art mediocre), #2 is a different story entirely.

Written by no other than Jeremy Whitley (of Princeless fame!) it promised and really delivered! It’s full of great ideas and references to popular culture (just like in the original Friendship Is Magic series!)

What’s even more important, it sends out a strong message of friendship and support especially to those who are ostracised by others. Long story short: I like it!

Here is a short sample for you: 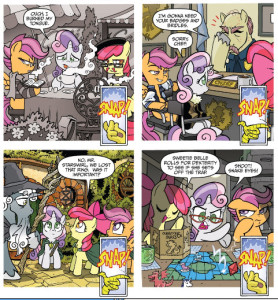 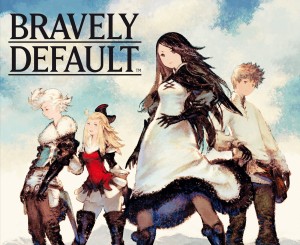 As mentioned here, I really enjoyed reading The Bunker. So, I’ve just gotten my copy of the new (restart) edition of Oni Press. 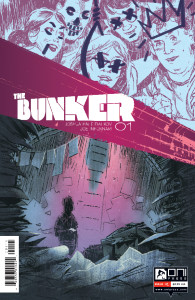 After thumbing through the book I have to say that the change from black & white to coloured pencil art definitely adds to the gloomy dark mood of the comic series. And while I normally don’t like republishing stories so soon after their first publication, I’ll make an exemption on this one and get it, too.

If you’d like to see a direct comparison between new and old artwork, here is one: More can be found over at Joe Infurnari’s tumblr! 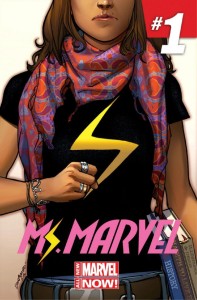 Ok, after actually opening my eyes, I was able to find the syllabus of the Social Issues Through Comic Books supermooc.

I shamelessly copy it from here for your reading pleasure:

Looks like I’m about to discover a fresh set of comics as I’ve only read the issues of Lazarus, Sex Criminals and some other issues of Hawkeye. Great!

The only point of critique I have to offer would be that the selection of comic books (this was true of the last supermooc, too, by the way) is rather US centered. But then, catering to an international audience must mean to choose comics that are both available worldwide and available in a language that can be read by most.

In case you didn’t know (Where have you been? Living under some rocks on the moon?) Christina Blanch (@christyblanch) of Ball State University taught a very successful mooc last year: Gender through comic books.

This year she returns with a second one: Social Issues Through Comic Books. Hop over to register here.